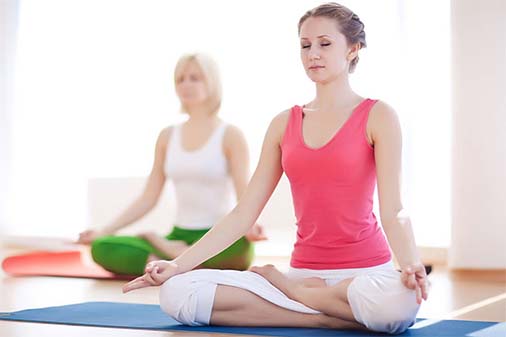 Benefits Of Yoga For Mental Health

Those practicing yoga experiences a number of factors that results in a profound effect on their mental health. These can be classified under:

Many people who practice yoga speak of “freeing the mind from mental disturbances,” “calming the spirit,” or “steadying the mind.” Reduction of nervousness, irritability and confusion, depression and mental fatigue are some of the benefits experienced. One experiences a relief from the pressure of his “compulsions.” His nervousness, especially any jitteriness, should subside or disappear.

The extent to which these benefits may be expected will depend in part upon whether or not one can approach and participate in them willingly and wholeheartedly; for one who tries to practice postures with anxiety cripples his chances for very much benefit.

“The positive side of the benefits from a full round of yogic exercises may be described as renewal of mental agility. Both mood and capacity for alertness, attentiveness and willingness to tackle problems revive. One may not be able to rekindle boundless enthusiasm late in a working day; early morning, or even noonday, efforts to recharge mental energies can revive a full measure of willingness. Traditional phrases, such as restored “spiritual vitality,” intend to convey the complex idea of mental spryness, agreeableness, resiliency, and feelings of confidence and self-sufficiency. Some even testify to attaining feelings of buoyancy and euphoria; these then provide a background or mood of well-being and assurance such that one naturally more fully enjoys both his ability and the worthiness of being more tolerant and generous.”

Yoga is not a cure all for all conditions. But its attack upon, and diminution of, some basic mental ills may indeed be just enough to pay dividends that grow in magnitude.

If, through use of yogic techniques, we can merely halt and reverse some mental cancer, some compulsive complex that keeps us chained to unrelenting, omnipresent and gradually increasing anxiety, we may reset a course which will bring us around to a healthier adjustment. We are all at times insane. We are all, in some degree, insane. Overwhelming waves of tension and stress, which may catch us in periods of physical and mental exhaustion, can produce a spiritual explosion which leaves us so helpless that we are at a loss to know how it all came about.

By recurrent, regular efforts to reduce tension through yogic exercises, we may stay and finally reverse our tendencies toward insanity.

Most of us succumbs to fears and anxieties – some valid and some purely imaginary. For example, as one gets older, he begins to fear that his life has not been sufficiently worth while, that he has fallen short of his goals, that he has failed to attain his proper ambition, that he has lost out in the race to keep up with the Joneses or in his attempt to measure up “in the sight of God”-however he happens to conceive his shortcoming.

Thus, when Ramacharaka, in his ‘Hindu-Yogi Science of Breath’, says one may, by controlled breathing, “practically do away with fear and worry and the baser emotions,” he refers to the growing ability of a devoted practitioner to diminish the power which both momentary and permanent fears have over us. One seeks to develop habits of resistance to the disturbing effects of excitement, ambition, antagonism and frustration.

The long-range goal of yoga is not just momentary relaxation, but the living of a relaxed life.

The goal of yoga is confident living. Its aim is to replace pessimism and its varieties such as cynicism with a “Yea-saying” appreciation of life, not only on any given day, but as a gracious, wonderful whole. When you achieve the yogic spirit, then you can say with the Stoics, “I accept the universe.”

If you cannot accept all of it, because some problems remain unavoidably troublesome, then you will accept the troubles which you have as (1) yours and (2) enough for you, without wishing you had still more troubles.

Poise, serenity, contentedness, patience, assurance-all of these are positive mental values attainable by anyone who has achieved a willingness to be at peace with himself and the world. The confidence desired is not just enough to do the day’s work but enough to live one’s whole life and one can do his day’s work more confidently if he has already predisposed himself to living his life with trustful serenity.

Although not everyone who undertakes to experiment with yoga can expect to achieve or maintain the goal described by Shri Yogendra, Yoga: Personal Hygiene, as “exuberant and exultant health, he should notice the sun more often when it shines. Swami Sivananda pictures the goal as “ecstatic joy” (Yoga Asanas).

Dechanet, a Roman Catholic monk who was led into yoga by his Catholic predecessors, gives a vivid account of how he uses yogic techniques as aids to worship. He describes a “euphoria that pervades the story of my experiment. I wish to make it clear that this euphoria is real and lasting and spreads through the various levels of my daily life, physical, Psychical and spiritual” (Christian Yoga). Even though few of us will achieve anything like perpetual exuberance, ecstatic joy or euphoria, attainment of a more trusting outlook on life provides a spiritual soil from which spiritual roses have a better chance to grow. The pragmatic experimentalist will say: “Try it and see.”

a. Yoga may reduce your annoyance with others and others’ annoyance with you. If you become less irritable, you tend to irritate others less and tend to be less irritated by what others do when they present themselves as problems to you.
Your obdurate, demanding, insistent, morose attitudes can make you hard to get along with. Diminution of these should make you less difficult to deal with. The social effects-upon your colleagues and clients, superiors and inferiors, to say nothing of family, public officers and service specialists-could be overwhelming.

b. You tend to be easier to get along with and you tend to find others easier to get along with.
Or, if your personal improvement grows beyond mere contentment, to exuberant appreciation, you may find both more people liking you and you liking more people. You become more adaptable, reliable, steady, alert, responsive, ever-ready, patient, gentle and humane.
When this happens, you become recognized as a more desirable person to deal with.
If you develop a buoyant spirit, you will find that buoyancy is catching.
Others, seeing you as cheery, tend to respond in kind, reacting more cheerily to you.
Your rewards increase.
The effects of yoga upon character as noted by Dechanet in Christian Yoga.
“Yoga also produces a more active, willing and generous disposition. It quickens the life of faith, of love of God and our neighbor. It quickens our sense of duty and responsibility as men and, above all, as Christians”. “It follows that Hatha Yoga influences character to the good. One man, after some weeks of practice, admits he no longer knows himself, and everyone notices a change in his bearing and reaction. He is gentler, more understanding. He faces experience calmly. He is content; the pinpricks of life affect him less or not at all. He is in command of his own will and goes about his studies without fear and anxiety. His whole personality has been altered and he himself feels it steadying and opening out; from this there arises an almost permanent condition of euphoria, of ‘contentedness’ “. “You will feel that gentleness and sympathy come more readily. You will not feel like venting your spleen on others as frequently as before, and if it should occur, you will regret it all the more. You will make a kind of pact of non-violence with yourself. You will still have fits of impatience often enough, and even of anger. But something will be telling you that this is not only bad but even useless, and that it really is not worth the trouble to fly out and get beside yourself for nothing. ‘A great need for sincerity -will bring you to detest, more than others do, not only lying but all forms of duplicity and dissimulation. You will sense the more keenly whatever is not genuine, and even what is merely conventional in speeches and words, and also in attitudes that men think they can take up in order to edify, but more often they take up lest they should lose face”

SHOW ME THE YOGA SESSIONS FOR STRESS RELEASE